Of Slums and Poems

The Sunday Post 26, October 2008 (with permission of the author)

“Maybe the thing that makes Kuching lovable is not that tangible. It is the relaxed ambience and quiet charm of a contented city where people of different races and religions live harmoniously together. Such a nebulous attribute is not easy to put down into words in a brochure. Kuching has to be experienced.” 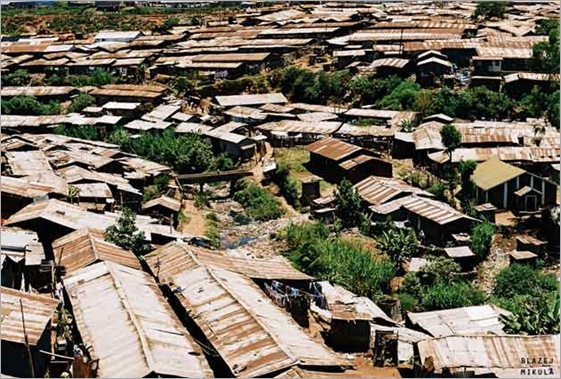 Pictured above is the Kibera slum, Nairobi, Kenya, the second largest slum in Africa.
Source: http://en.wikipedia.org/wiki/Slum

“Take me to the slums area.”
“Slums?” said I, taken aback.
Perhaps it was my tone and my facial expression that prompted Rita to go on to explain somewhat patronizingly.
“Yes, slums, you know what they are, the poor area where the poor people and squatters live.”
I could see that the other passengers in my car were also giving me looks tinged with pity for not knowing that famous (or infamous) bane of Asian cities.

Yes, I know what slums are. I have been to some of the major cities of Asia. Heck, I have even visited Tondo and Smokey Mountain of Manila to know exactly what she meant. Yes, slums, I have seen them. I have smelt them.

Smokey Mountain was a rubbish dump for Manila in the District of Tondo. The 2 million ton garbage heap attracted a huge squatter community who scavenged the garbage for their livelihood.

No, my bewilderment was due the foreignness of the concept of “slums” in Kuching. Having settled comfortably in Kuching for some time now, the image of that crowded unsanitary habitat with all its unpleasantness seemed to have faded from my mind.

I was taking a group of journalists from the Commonwealth Journalist Association on a whirlwind tour of Kuching. Rita, who hailed from India but settled in Britain, went on to explain that it is her practice whenever she visits a big city to make a point of visiting the poor areas as well as the affluent areas. “It gives me a better feel of the city.” She said.

So I drove around Kuching for a good three hours to give them an impressionistic view of the city. All I can say is that they loved the city and to the person said that they want to come back for a holiday with their families. And I don’t think they were just being polite.

Ironically, sometime ago I was talking with some friends about the attractions of Kuching and if we were to promote it as a place to visit what would we say about it. For a while we fell into the trap of many a tourism writer who succumbed to the formulaic description of the tourist attractions of a place. We talked about pristine beaches, crystal clear water, vibrant nightlife, and shopping, all predictable stuff. However, using that standard yardstick and comparing to our neighbours, Kuching really doesn’t have too much to shout about. We don’t have the powdery white sand of Boracay of the Philippines, the crystal clear waters of Sabah, the wild nightlife of Bangkok and our shopping complexes are dwarfed by mega malls of the other Asian cities.

Indeed, in pitching Kuching as the typical tropical postcard type of tourist destination can yield embarrassing results as reality does not match up to the hype. Some years ago I received a call from one of the hotels in Damai beach. Among its guests was a honeymoon couple from America who wanted to learn SCUBA diving. I met the charming young newly weds. They were both good swimmers, the husband being a lifeguard. I asked them why they chose to come to Kuching to do their diving. They said that they came across an advertisement about “the pristine underwater marine life and untouched coral reefs” here. Those who are familiar with the underwater world would know that Kuching resides somewhere at the bottom rung of the world ranking of good dive spots. While other dive sites boast of underwater visibility of 30 to 100 feet, here off Kuching, we count ourselves lucky if we can see up to fifteen feet.

Fortunately the couple had not done any diving and thus did not know any better. And the novel experience of swimming underwater made their experience around the islands off Kuching a happy one. Seeing their keenness I recommended that they visit Sipadan, that world famous diving paradise (I am not exaggerating) in Sabah. Of course they were totally blown away by their experience there.

A few weeks later I received an email from them “. . . thank you so much for introducing us to this totally new and exquisitely beautiful experience. Our time in Sipadan was absolutely brilliant and will remain a most memorable holiday.” I noted that they pointedly avoided making any mention of diving in Kuching.

The point I am making is that sometimes we tend to focus on the usual run-of-the-mill tourism products — spectacular scenery, sea and beaches, nightlife and shopping, etc. and thus totally miss what is our forte.

When I asked my visitors from Uganda, Mauritius, Britain and Bangladesh what they like about Kuching they did not specify anything in particular, though they were highly impressed by the cleanliness of the city, the well preserved historic buildings and the places of worship.

“In my country we also have such historical buildings from the colonial era but they are mostly in a rather dilapidated condition,” said one of them. We were standing in front of the old Court House, looking across the river to Fort Margarita. Then someone said, “It is not just the buildings I like, it is the feel of the city.”

Maybe the thing that makes Kuching lovable is not that tangible. It is the relaxed ambience and quiet charm of a contented city where people of different races and religions live harmoniously together. Such a nebulous attribute is not easy to put down into words in a brochure. Kuching has to be experienced.

After the futile search for slums, we ended up near the Astana on the north bank of the Kuching River. From there, the city with the smooth flowing river in the foreground looked beautiful.
“Are there many poems written about this river?” asked one of them. I think that is a question which is pregnant with meaning. Maybe sometimes we just forget to count our blessings.

The writer can be contacted at desee@pc.jaring.my

Uncle Dunstan, thanks for letting me post your article here. –Lionel